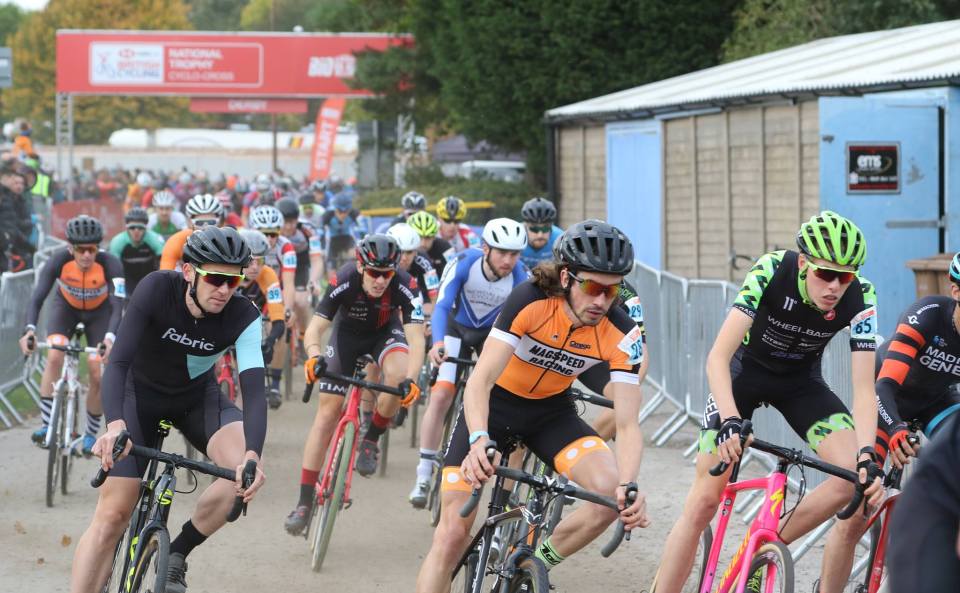 Last weekend saw Team Magspeed head to Round 1 of the National Trophy Series in Derby. Phoebe, Sam, Nick and Scotty were all up against the best riders in the country in their respective age groups. With very damp conditions, and the addition of the Vets races, on Saturday, the scene was set for a very slippery first race on Sunday – Sam’s Junior Men’s race. A good worn racing line had been carved out by the previous races and the cool early temperatures made for some challenging conditions for the boys. Sam had a fifth row start, so lots of work was to be done. A very strong line up in Sam’s race including current Junior World Champion, Ben Tullet, meant for a scorchingly fast race. Sam managed to get off the line well considering he was right in the middle of such a busy grid, and straight away he started to gain places! Over the next 40 minutes he rode a strong, composed raced, picking off riders lap on lap and working his way up to 14th. What a great first trophy race for our up-and-coming junior rider…onto Round 2, Scotland.

Up next, Phoebe’s race… and with the conditions constantly changing and the ground drying, it looked like it was going to be an even faster race. As with Sam, Phoebe didn’t get a very high grid position for Phoebe, but as soon as the flag dropped, she got her head down and fought all race long with the best girls in the country. 40mins of very fast racing later, our girl in orange had put in a very strong, classy performance in a solid Round 1!

Nick and Scotty then took the start line for the final race of the day, the Men’s Elite category. Here is a review of said race from our man in the thick of it, Nick Blight…

The wife wanted a weekend away so, van loaded, we headed to Derby for the National Trophy – armed with Vicks and olbas oil to help with my man flu (typical before a race). Once at Derby I had a quick practice lap and I was smiling all the way around – what a course: technical, quick, Belgian style flyovers – it had it all. Sunday morning was proper cold and damp, the course had been cut up, but the sun soon dried most lines. However, after mine and Scotty’s practice, we agreed it could catch you out. At the National Trophy events there is a certain tension at the start like no other events I have done. The start is like no other – extremely fast. I had a great start and stuck with a group for several laps; the pace is so rapid any mistakes are hard to recover from and looking back I made a few, but these events are all about experience and getting the chance to race against the some of the top riders in the world. I am chuffed with 45th elite male and 69th overall. A weekend away with the team was great! Massive thanks to pit man Stu, Nibbs (Sam’s dad) and the Wife #teamorange

A great Round 1 for our girls and boys in orange, getting in the thick of the action. More next time out and Round 2 in Scotland, hopefully with even more of an orange presence on the starting grid!