Last weekend was another two days of racing action for the team – this time even more spread out geographically! Phoebe was smashing it in the Notts and Derby League, Nick and Sam in the Western League in Bristol, and Scotty and Stu headed overseas for their annual trip to the homeland of Cyclocross – Belgium. Our two new boys Lee and Sean got their legs fired up again after a bit of time away from racing, at the Gorrick Winter Series.

First up, on Saturday, it was Phoebe’s time to shine in the ever-popular Women’s Notts and Derby League. This series has gone from strength to strength, with the grid filling up each week, so once again the stage was set for a tough battle with some very speedy girls. As expected it was full on from the gun for a fast and furious race, this week held at the very open and exposed Holme Pierrepont. Here is a Pheobe-eyed view of the race:

“On Saturday I felt really tired and had super heavy legs and to be honest, wasn’t really up for it. I went over so many excuses in my head but I got myself together, gave myself a little pep talk and got to the start line and once the whistle blew I was back in the game! I got a good start and once again it was a very tactical race, wheel to wheel all race long. The course had plenty of single track and I pushed the pace heading into the first section to get ahead of my usual rivals, then hit a tricky off camber section and was with Alex Farquhar (Army Cycling) for two laps until she managed to put some time into me when I slipped off on a rooty corner – she managed to hold onto that gap until the finish. I managed to just hold onto 3rd senior, with 4th hot on my heels. Mentally it was a tough race for me as my legs really weren’t up for it… but luckily they got going eventually.”

Meanwhile on the continent, Scotty lined up against some rapid Belgian boys in the chilly Flemish sun. Here is how Two T’s found day one:

“With the normal Saturday race being cancelled, we looked a little further afield and travelled an extra hour or so to a DMV Cup race in Boortmeerbeek. Parked up, went to sign on, as per usual a cracking set up with a big beer/food tent, music blaring out, the barriered start area with the stage for presentations and the commentary gang to do their thing…always makes me smile when we go back to these races, I love it! Back to the wagon, change, then time to go practice and get a few laps in and decide tyre choices and pressures. A really cool course, lots of switchbacks, a bridge, hurdles, sandpit (of which you hit full pelt at the end of long straight) and some really fun rutted corners to fly into and rail it around. The course also took you around an old stately home and two lakes, so, some pretty cool backdrops. Race time was almost here, warmed up and ready, I took my place at the back of the grid (no league ranking points for their races- something I’ve got used to when travelling to Belgium) and then the two minute call, which went to one very quickly, then boom, we’re off. As seems common over here, a tarmac start straight and into a tight bend onto the rough stuff and I get an ok start and make a few places up before we hit turn one. Then slot into the line of riders powering towards the first set of switchbacks, then up and over the bridge, and off into more switchbacks and the inevitable hard move by a fellow racer early on, who doesn’t want the race getting away from them… Give it a lap and everything is a bit more settled and I am slowly but surely picking riders off, then trying to get to the next group and my legs and lungs aren’t feeling great after a week of trying to fend off another cold and little riding, hoping that would help the cause but they seem to be ‘coming back to me’… I start to catch three riders and we come into the sandpit and quick, the three of them that are ten bike lengths ahead all try for the same bit of sand… its never going to work, the two on the outside squeeze middle man out and he goes down, hard! I’m coming into the sand sideways, trying to miss rider and bike, and as some of your may know, when riding in sand, the bike doesn’t necessarily go where you expect, but I somehow miss matey on the floor as I drift on past his body laying in the middle of the sand. Then time to try and catch those other two and for the rest of the race I was homing in on them and I was feeling better and better as the race went on, but it wasn’t quite to be, just missing out on ‘the catch’ but, it was bloody fun all the same, coming back in 15th, tidy.” 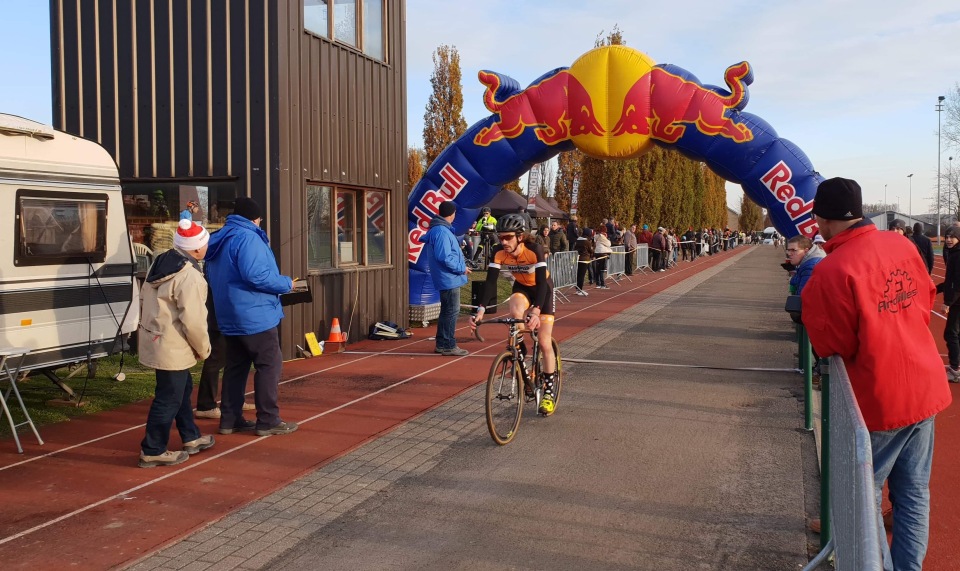 Sunday saw Scotty and Stu head to Aalter, just a short drive from their Ghent base and to a cracking course set out by the local ‘Weilerschool’. The boys have been to this race for the past two seasons and it’s a great venue with a big start list over all of the categories. Just like Saturday’s race, it was a dry and fast affair, so, tyre choice made, it was time to warm up. A mid afternoon start for Scotty’s race and with another back row start and an even bigger grid than yesterday, it was going to be a tough old race. Here’s how Scotty saw it:

“Back to Aalter again, I love this circuit, really fun with plenty to keep you on your toes, as if racing a load of Belgians wasn’t enough… A packed grid meant I had to chase from the gun and it was a mad start, a full on sprint across a field into a hairpin turn, trying to hold my line and not get pushed out. I got a half decent jump off the line and managed to pick up a good few spots by turn one and then it was time to try and pick of as many as possible and as soon as possible, before the top boys were gone, that being easier said than done. Legs were definitely fairing better today and I got into a good rhythm pretty quickly and seemed to be passing people at a good rate, but the tight twisty sections were slightly frustrating as it was hard to pass, so had to make the straights count and put the hammer down. As the race went on, there were sizeable gaps appearing and I was on a mission to catch the two up ahead, but I was on the ragged edge on the hairpins and just as I was latching onto the back of the next two, I rolled a tub and that brought me to quite an abrupt standstill. I jumped off, pulled the tyre back onto the rim and then jumped back on and then steady away until I got to the pits, where Stu was waiting with the spare bike. A quick swap then the chase was on, again but time was running out and I kept the pressure on until the very end, but it wasn’t to be, but had a bloody great time trying though.”

Two top 15 placings for Scotty over in the heartland of ‘Cross, so, all in all, a pretty decent weekend for the first Magspeed on (European) tour of the ‘Cross season. Part of the annual trip was also to take in the sights of Ghent, plus the local delicacies, including frites and mayo and the most amazing waffles…

Back in Bristol, Sam and Nick were representing Team Orange. With some big goals lined-up for both Sam and Nick in the next month, they’d had a heavy week of training. Coupled with a full-on weekend at Round 3 of the Trophy series just a week earlier, Lockleaze was always going to be a tough day out. Here is how it all went from the eyes of our man Nick: 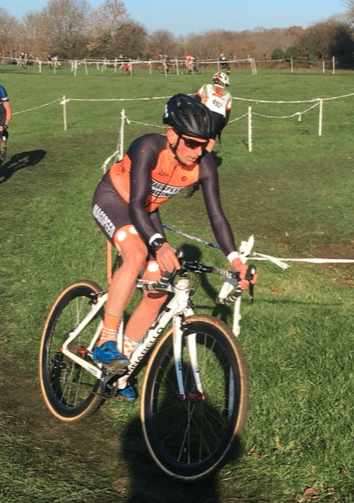 “I took a trip up the M5 Sunday to ride in the Western Cyclocross League: the sun was out and the course was good, a mix of fast straights, some tricky switchbacks plus a leg sapping climb – all of which were pretty dry. I have been training hard since  the Crawley National Trophy with the masters’ World Champs in mind, this took its toll on race day and I was unable to go with the race pace up front. My team-mate Sam was in a bunch up front, however chest problems soon put him out of the group to settle into 5th place, which is where he finished. I hung onto as many wheels as possible but 12th senior was not the result I had hoped to get. It was great to catch up with the lads but I am looking forward to a weekend off, this season has been full on so far. I leave for Belgium next Thursday and I am looking forward to racing the Masters Worlds, as I have been running so well it should put me in good shape for the sand. We are heading back to race the South West Champs the day after so it’s going to be a mad one. I am stopping the rain dancing as it’s not working #teamorange

Our two new MTB boys, Lee and Shaun, headed to the Gorrick Winter Series. MTB race on Sunday, to wake the legs up after some time off racing. Here’s Lee’s round up of Sunday’s events:

“Me and Sean entered the sport race today. We both started in the back row which was pretty poor as there was a mixed bag of abilities. I got stuck behind someone trying to clip in to his pedals. Sean then smashed it out time-trial style up and along the gravel fire road and got into the tight single track in first, I was about seventh wheel. When it opened onto more fire road I had to give it my all to get near Sean but managed to pass and pulled into the next lot of single track in 3rd. Think that worked out well as Sean then done his best blocking skills and 3 of us had a big gap. I managed to stay on the wheel of 2nd until the last lap and then my legs gave up but happy with 3rd and Sean came home in 13th.”