Last weekend saw the National Trophy Series come to a close, with the country’s best descending on Shrewsbury Sports Centre to round off the season-long competition. Both Tracey and James were racing on Saturday in the Veteran races and then Sam S, Phoebe, Scot and Scotty competed on the Sunday. Nick was racing down south in the final round of the South West League, trying to bring home a top 3 place in the series.

First up was Tracey, who was going into the final race as series leader and, recovering from an illness she’d picked up over Christmas, she was going a little into the unknown as she took to the start line. After a season-long battle with Somer Valley’s Miriam Whitehurst and Catherine Kilburn of Mid Devon CC, it came down to the last race round of the series for the top step of the podium! After a tough old race on the newly amended Shrewsbury course, our girl came away with 2nd in her category which was enough to take the title of Winner of the 2018/19 National Trophy Series!

Next up was the Veteran Men’s race and James’ time to shine. A grid full of quick boys, it was going to be a fast and furious final round of the series on what was a relatively dry Shrewsbury course – a normally complete bog when it’s held at the time of this year, so a nice change and still enough mud to make it interesting! Team Orange was in the mix from the start and James put in a solid performance all race long to come away with a cracking 10th place, boding well for this weekend’s National Championships! 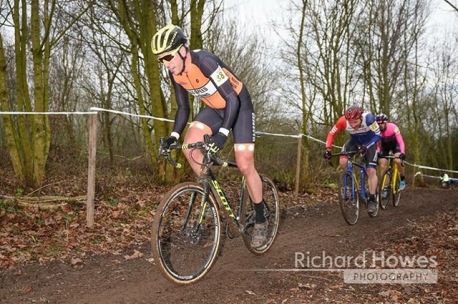 Sunday morning was time for Sam to have a blast around the increasingly ‘slick’ course (with some very challenging off-camber sections) against the speedy Junior boys. After getting clipped in well, Sam got ‘done over’ on the first very tricky corner and that led to a good few laps of mistakes and getting caught out by other riders crashing into him. Quite a frustrating race for our young man, but he never gave up, sprinting all the way to the line… a character building race… let’s hope he can keep away from the trouble this weekend at the Cyclopark! 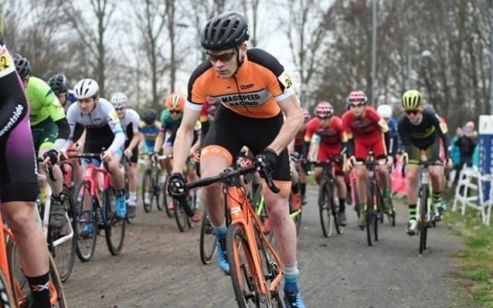 Phoebe was on next in the Women’s race and another tough event for one of our Team Orange riders! The pace was high from the gun as expected and it was always going to be a tough day for the Matlock rider. Phoebe still put in a courageous effort and then, straight after her race, it was into waterproofs and into the pits with Stu and Tomo, whilst Sam was out on photography and cheering duties… a solid team effort as usual!

The final race of the day: the Senior Men’s – one hour of thrashing around the now slippery and chewed up Shrewsbury course. Both One and Two T (Scot and Scotty) took to the start line and then as the whistle blew, it was full on into turn one, the off-camber hairpin! Scot got the better start of the two, with Scotty getting pushed into the barriers at the off. The boys then stayed in sight of each other all race long… a repeat of their last outing together in York! It looked like Scot was going to get the better of his younger, longer-haired buddy once again with a big surge mid race, putting some time into Scotty. But the gap came back down and the two were stuck together for the next few laps. As the light faded, the boys in orange battled to the finish line with Scotty just pipping Scot the the line, for 17th and 18th Elite… the boys did good! 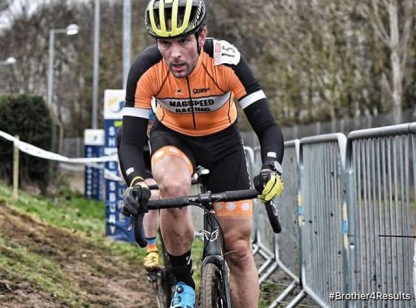 Meanwhile, a little further south, Nick was aiming for that podium spot…here are some of his thoughts on the race…

Just before Christmas I travelled up to Bristol to race in the Western League at Oldbury Court. I had an amazing start and ended up battling at the front for the first lap, then settling into a group of 10 or so riders and managed to hang on for 6th place – this gave me great confidence going into the Christmas break.

I trained over Christmas with eyes on a top 3 finish at the final round of the Southwest Cyclocross League in Paignton. The course was set out around the criterium circuit and featured some off-camber and several switchbacks- the going was soft but not muddy so I opted for grifos. I warmed up and timed it spot on as just as I rode into the park the commissaire was gridding on the front row, but then the whistle went and my legs instantly felt dead. I was in the top 8 but I had nothing to offer, I made no mistakes all race and just settled into a bearable pace – I came away with 5th senior and 7th overall. I was very disappointed with my result and had lost my 2nd place in the league but in hindsight I am happy to come away with 3rd place overall in only my 2nd full season. Focus is now on the National Champs and I am really looking forward to it however I am nervous… these bigger events have been a massive learning curve for me this year! #teamorange .

Good luck to all of our riders competing in the National Championships this weekend… let’s turn things Orange!