The Gravesend Cyclopark was the technically-demanding venue for the 2019 National Cyclocross Championships, and the Magspeed Racing team headed east with one aim – to have a fun couple of days with their mates. Of course, they came away with a lot more than the memories of a great weekend – Magspeed rider Tracey Fletcher is now the Vet-50 Women’s National Champion!

Fresh from winning the National Trophy Series, Tracey went into the National Champs race as a favourite, but will still conscious of her main rivals – Miriam Whitehurst (Somer Valley CC) and Nicky Hughes (Specialized Racing). With very little rain during the preceding week, the course was dry, fast and technical – thanks to the hard work of the organisers. Tracey battled with Whitehurst all race long, at one point surrendering the lead to the Somer Vally rider, but put the hammer down near the end of the race to bring home the gold!

After the excitement of Tracey’s win, it was James’ turn to put it all out there against the top Vet-40 chaps – including many ex-pros! Some people may think that the racing gets easier in this category, but considering the Vet 40 grid is often made up of some seriously talented ex-pro cyclists who have years of experience under their belts, the opposite is often the case! After a solid result last week, Tomo was confident heading into the race – although a bit more mud would have been a preferable! After a decent start and a top-20 position throughout most of the race, disaster struck towards the end with a puncture – a nightmare on this fast course, unless the pits are very near! Sadly for Tomo, this wasn’t the case, and all chances of a good result disappeared with the flat. Our man dropped outside the top 20 and chased for the remainder of the race to get back towards the front, eventually coming home in 35th – still a very respectable result, even if not what he was hoping for. 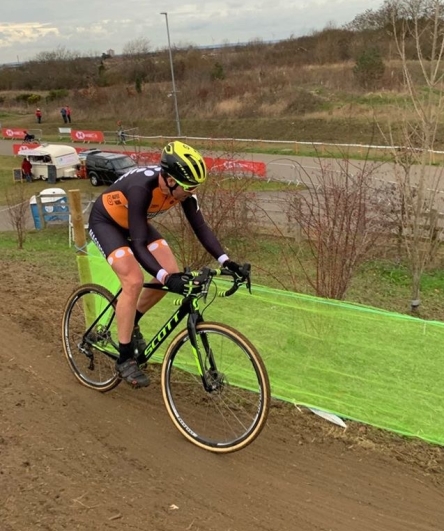 The team got together on Saturday night to celebrate a fantastic result for Tracey, before day two began early on Sunday morning. Scotty, Nick, Phoebe, Sam and new boy Henry spent some time riding the course during the morning, before the Junior race began. Phoebe had a bit of a tumble on her practise laps – nothing broken on either body or bike, but the crash gave her a bit of a confidence knock, which wasn’t ideal just before she took to the start line against the top women riders in the country.

Sam and Henry (making his debut for Magspeed Racing) were pitted against a big field of up and coming riders in the Junior race, including current Junior World Champion Ben Tulett. After a rapid start on the tarmac start/finish straight it was flat out into the first off-road section and a decent start for our boys… for Sam though, this didn’t last long as he came down on lap one and had to swap bikes in the pits before battling back through the field – from 45th position. Henry also joined Sam in coming a cropper, our new boy went down hard on the banked section just before entering the tarmac straight. Despite the get-offs, both boys had their heads down all race long and Sam stormed home in 14th and Henry in 38th, pretty handy for our young guns!

Phoebe was up next in the women’s race, against a handful of ladies fresh from the continent and a season of professional racing – raising the bar even further than the tough National Trophy series in which Phoebe competed this year. As soon as the whistle went, all thoughts of the morning’s crash went – it was game time and our girl got into the swing of things pretty quickly! Though, like Tomo, more mud would have been nice for Phoebe, she got her head down and came over the line 18th Elite Woman – not too shabby at all! 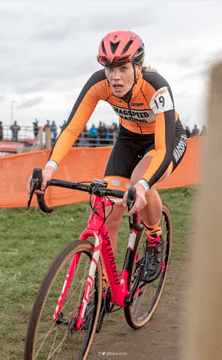 The last race of the weekend was the Elite Men’s race in which both Nick (riding in his first National Champs) and Scotty flew the spotty flag. Scotty had picked up a stinking cold a couple of days earlier, which was not ideal. But his team’s efforts, their smiling faces and support, plus the crowds and the excitement of the biggest race in the UK Cyclocross calendar were enough to overtake those coldy feelings. At 2.30pm, a packed field of riders was ready to battle it out in the final big race of the season on English soil, and from the gun it was a manic sprint along the tarmac to the first corner. Before the bunch even reached the end of the tarmac, the crashes had begun! Although Nick and Scotty were held up at times due to crashes, thankfully neither of them came down themselves.

It was a fast and exciting course, made all the more exhilarating by crowds all the way round, and cameras filming for the live coverage of the event on Youtube. The two Magspeed riders got into their rhythms and both rode strong races, managing to increase their pace as the race continued – although sadly not enough to escape the UCI’s 80% rule. They were pulled from the race with about a quarter left to go, along with the majority of the other competitors! Out of the 100 riders on the start line, only 13 made it across the finish line, thanks to the amazingly strong performance of Under-23 star Tom Pidcock, who won the race by miles. Both Nick and Scotty were happy with their performances, Scotty coming away with 26th in the Elite Male category and Nick in (46th!?!). Once finished, everyone headed back to the Magspeed tent for a warm down, then coffee and birthday cake for Nick’s birthday – what a cracking way to spend your birthday, and what a fantastic weekend for Magspeed Racing!