Last week, two of our riders headed to Mallorca for some sunny spring miles ahead of the impending season ahead. Scotty and Stu spent the week on the Andy Cook Cycling Spring Bike Camp, based in the north of the island at Club Pollentia Resort. Scotty was working as a ride leader, and Stu joined a group of 80 other clients of all ages and abilities for a week of fun in the sun! 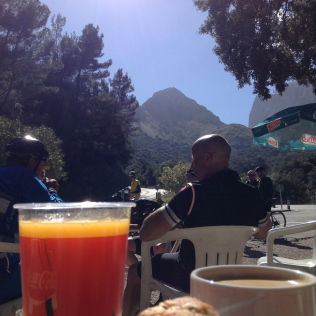 Stu and Scotty covered nearly 500 miles over the week under the Spanish sun, traveling along some amazing roads around this beautiful island that has everything a cyclist could want, from the scenic flat-lands in the centre of the island, to the 14km ascent of the Puig Major. The boys had a cracking week in a solid group led by ACC’s Simon Kay and Scotty, covered some serious miles and managed to time the trip to coincide with awful weather back in the UK!

In Mallorca the boys found some spectacular roads and smiles were a plenty. A full-on week was rounded off with a few hours kip after landing in the UK, before Scotty and Stu, with Sam in tow, headed to Winchester for Round 1 of the Southern XC MTB Series: stay tuned to see how the boys got on. For now – adios Mallorca! The boys will definitely be back, hopefully with some more of the Team Orange crew!