And just like that (well, 5 months later) the season is done! What a season its been for the team! Racing all over the country and also jumping the channel and into Belgium and Holland to race in a varied selection of races all the way from local League races through to National Series races and then even the Masters World Championships. With a massive haul of wins and podiums it was a great season in the mud and we, as a team had a fun time and worked SO well together helping each other out when the going got tough!

The season finished off with most of our Western League gang heading to the cracking Shamcross race in Keynsham and it turned into a very hard race to finish the season as recent rain made for a mucky old time and the mud was VERY tacky and ‘perfect’ for clogging up the bikes, therefore meaning lap changes were on the cards. Alan, Nat J, Henry, Sam and Scotty took to the start line.

Alan and Nat were off first for Team Orange and both were stuck in amongst it, though Alan was a little further back than he’d have liked after an uncharacteristically bad start and was left with a lot of work to do! But he got his head down and worked his way through the field and finally finishing 8th V50 which after his start wasn’t too shabby at all! Meanwhile behind, Nat was in race long battles with some strong ladies and she used her superior strength to gain positions on the tough muddy straights and used to her head to try and learn as much as possible from riding the off camber and very slippery sections as every race is very much a learning process for Nat, this being her first season of ‘cross and blimey, how shes come on! A solid ride meant that she came home in 5th overall and with that 3rd Senior.

The final race of the day was the Senior/ Junior Men’s race (with the V40 men not too far behind) and our lads were in for a tough race with some fast boys in the pack and also the conditions making for harder racing with the mud starting to dry out and make for sticky and very cloggy mud! A pretty decent start for the boys in Orange with all three within the top 10 and it stayed pretty much that way all race long. Sam got the best start of the three and then Scotty passed his younger compatriot and went off to chase down the leader Sam Holder. It turned into a three horse race up front and it was never a formality who was going to win right up until the last lap! After a very up and down season Scotty was happy to bring home 3rd place, just behind the eventual Senior Men’s Western League Champion Sam Holder. Smithy came back in 5th to round off a great season with LOTS of results to be proud of and Henry bringing back the Junior win and 8th overall! 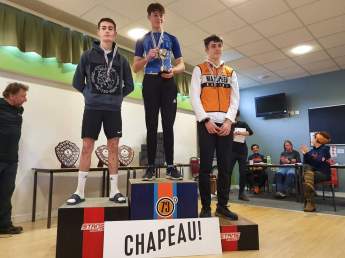 All in all a cracking season and it was a great way to end the season… Time to give the bikes a good old service and put them away for a little while. Though the time will fly and it won’t be long before those whispers of “cross is coming” start to circulate, but, until then, shall we have a little rest. Nice one Team Orange, we did good.